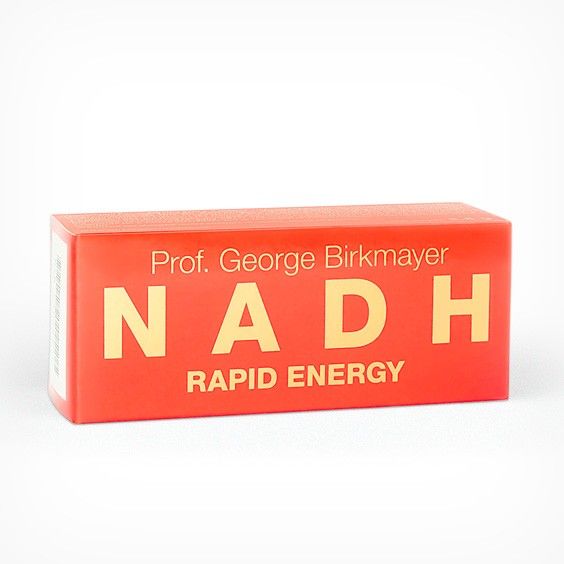 NADH Rapid Energy is a food supplement. Immediately after intake it activates the endogenous energy production and due to this increases the physical and mental energy. The effect is observed after about 20 minutes.

NADH Rapid Energy can improve attention and concentration. It can keep you awake and remove the consequences of sleep deprivation and Jet Lag. The energizing effect can be measured by cognitive test for vigilance and on the ergometer after 10 to 15 minutes. The simplest method to proof the effect is by kinesiological tests.

Intake: Put 1-2 lozenges under the tongue and let it dissolve. The active ingredient NADH is absorbed by the oral mucosa. A longer lasting higher energy level is observed 3-4 weeks after regular intake.

Side effects: In all clinical studies performed so far no side effect, incompatibleness, or allergic reactions have been observed.

Tests have shown help to those who are often fatigued as well as many other health benefits of a powerful antioxidant.

Formulated by Professor Birkmayer in Austria. Now available in the UK.

NADH or N.A.D.H (an abbreviation for nicotinamide adenine dinucleotide hydride), also known as Coenzyme 1 is a very versatile and important nutrient. Professor Jorg (George) Birkmayer is the world expert on the subject, and we obtain it directly from his company. Because of its many applications, it is listed in all of the following categories of the web site.

Plase note, this is a fairly high strength 20mg per tablet NADH product. Most NADH products on the market are 5-10mg.

The most promising natural substance in our body is NADH,which stands for nicotinamide adenine dinucleotide hydride. NADH is the biological form of hydrogen. It reacts with the oxygen present in every living cell, thus producing energy and water. The more NADH a cell has available, the more energy it can produce, the better it functions and the longer the cell (and the entire organism) lives.

Though NADH is present in our foods, we take in only marginal amounts of it from our daily diet. Most of the NADH is destroyed during the cooking process. The situation would not be greatly improved even if our diet consisted mostly of raw meat and fish, as the NADH present in these foods is degraded within seconds by the acid environment produced by the gastric juices in the stomach.

Is it possible to increase the amount of NADH in the cell by adding NADH from outside? The answer is yes. This suggests that we can increase the energy levels in our cells. Due to this fact, the cells can produce more of all the components essential for life, and thus they will function better and live longer. This is feasible by supplementation with NADH in order to boost the hydrogen taken in by the human body.

The amount of NADH a cell contains depends on the amount of energy it requires. The heart and the brain need the most energy of all our organs, thus these organs benefit the most from an external supply of NADH. All other organs, particularly the lungs, the liver and the kidneys, also get more energy from NADH and function better. Biological hydrogen is the fuel for cellular energy production and nutritional supplementation can provide our body with more NADH.

The effect of NADH (Coenzyme 1) on the human organism was first discovered by the Austrian scientist Prof. Dr. Dr. Birkmayer. He was the first person who was able to stabilize NADH in tablet form and make it bioavailable to the body. For his NADH formulation, he received more than 50 patents and is internationally recognized as the leading expert in the world on NADH. The effect of his NADH formulation is documented in numerous studies.

Professor George D. Birkmayer (born 1941, Vienna) has a PhD in biochemistry and human medicine and obtained his first degree in cell biology at the University of Munich and subsequently at the University of Graz, where he is Professor of Medicinal Chemistry since 1988. He has authored more than 150 scientific publications and has a strong international profile with visiting professorships at the universitie of Dozenturen Beijing, Xi'an, State, Cornell, and the American College of Nutrition. He is also renowned for worldwide lecturing on his research in neurology and anti-aging medicine.