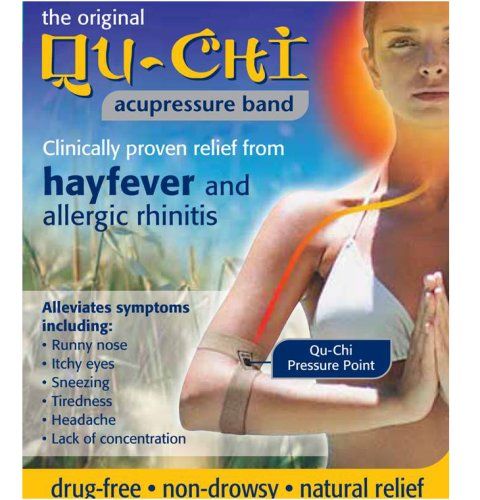 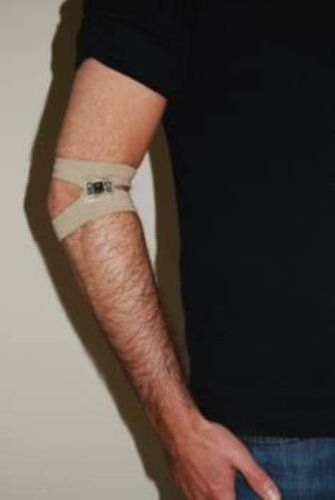 Be the first to review this product
Qu-Chi band operates by stimulating an acupressure point in the crook of the elbow to help free the pathways to the nose & throat and quickly reduces breathing problems.
Regular Price £14.99 Special Price £12.30
Availability: In stock
SKU
QUICHI
Add to Wish List Add to Compare
Details

The Qu-Chi ('Ku-Chi') point has been for thousands of years by acupuncturists and practitioners of Traditional Chinese Medicine. It lies on the Large Intestine meridian which runs between the forefinger and the tip of the nose. It is used to pull energy away from the face to treat sinus problems eye complaints allergies and skin problems. The Qu-Chi point has has been used to treat the nasal and eye symptoms of rhinitis as well as pain in the shoulders and elbows. Our research suggests that the Qu-Chi Band can be very effective in relieving the symptoms of hay fever.

The increasing unpredictability of our weather systems and the resulting shift of the seasons from what we regard as their traditional timings means that the first breath of spring can arrive unexpectedly early. And for those of us who suffer with hay fever this often catches us unprepared as we reach for our tablets, nasal sprays and creams, only to find the cupboard bare.

With the new Qu-Chi acupressure band from Hotties you need never again find yourself without the means of relief from hay fever symptoms because it doesn’t need to be constantly replaced like tablets and other treatments. This simple elasticated band, with its integral pressure button, can be worn as frequently and for as long as you need it, day or night. It can be used all year round too, for non-hay fever related allergic rhinitis, such as dust-mite and pet allergies.

The Qu-Chi band operates by stimulating an acupressure point in the crook of the elbow, which helps to free the pathways to the nose and throat and quickly reduces breathing problems and streaming eyes and nose. Because it is a totally drug free natural product there is none of the drowsiness or other side effects associated with many conventional treatments. However, can also be used safely in conjunction with other treatments without any adverse effect.

Designed and developed in the UK by a fully qualified acupuncture and acupressure practitioner, the Qu-Chi acupressure band is registered with the Medicines & Health Regulatory Agency (MRHA) as a Class 1 medical product.

Qu-Chi (koo-chee) is the Chinese name for an acupuncture point (literal translation ‘crooked pond’). The point lies on the large intestine meridian. Meridians are pathways around the body, through which vital energy (known as Qi or Chi) flows to maintain normal body function. The large intestine meridian starts at the forefinger (LI 1) and travels through the throat to the nose (at LI 20). The Qu-Chi point is point is point number 11 on the line and is thought to pull excess energy from the face and nose.

The point can be located easily. When the elbow is bent, a skin crease can be seen. The LI-11 point lies at the end of the crease on the outer aspect of the arm. The point has been used for thousands of years to treat conditions such as eczema, skins problems and joint problems. In Chinese medicine speak it is said to remove superficial heat from the skin and could also be used in conditions such as urticaria, tennis elbow and sinusitis. There has also been some investigation of this point by western scientists who have shown that it can stimulate part of the immune system and is beneficial in reducing itching symptoms in patients with kidney disease. Colours may vary.

Clinically tested, drug-free products works as a natural alternative to treat hay fever
Totally drug free natural product so no drowsiness or other side effects associated
Qu-Chi band operates by stimulating an acupressure point in the crook of the elbow to help free the pathways to the nose & throat and quickly reduces breathing problems.
It can be used all year round too, for non-hay fever related allergic rhinitis, such as dust-mite and pet allergies.
Qu-Chi acupressure band is registered with the Medicines & Health Regulatory Agency (MRHA) as a Class 1 medical product. 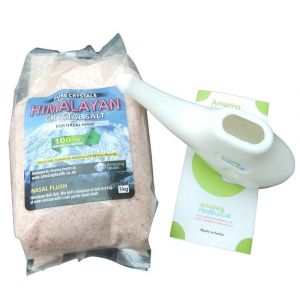 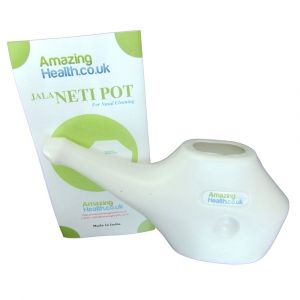